While we ended our day a little bit short yesterday due to the pouring rain, we thoroughly enjoyed the enthusiasm of a group of young local children on the site!

Today was much brighter, drier and very warm. So we dug deep into some of the building layers in an effort to expose the extent of the medieval buildings, only to find various levels of complexities starting with the post-medieval house. Within this increasingly complex stratigraphy, excavators are recovering some interesting individual objects, including buckles, buttons, stone and ceramic 'spindle whorls' (including one off the spoil heap) and loads of medieval pottery. It's become quite addicting to expose the next layer of stone, as we try to uncover the remains of this unrecorded settlement! 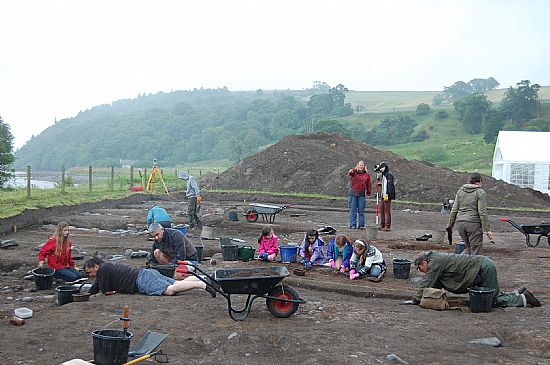 Comment from Mom at 15:45 on 21 July 2014.
Wonder how warm "warm" is. We have pouring rain today! There is an article about the dig in upstate New York describing the search for the story about the French, English and colonists fighting during the revolutionary period. Also, in Beaufort, SC, a great dig going back to at least the 15th c, looking for early settlements.
Comment from MKP at 22:40 on 21 July 2014.
It was 25-27 deg C, so yes warm (the above picture was a downpour from a chillier day, probably 18-19deg)! It would be interesting to see if any of the artefacts from the America sites have similarities to Cromarty!