August brings an offer I can't refuse: three weeks hard labour with no pay (accommodation not included). Friend Christine who likes to share (recte supervise) my archaeological adventures is concerned that the expedition into Easter Ross will compromise her latest enthusiasm – a survey of domestic grinding stones in Moray.

"Will there be querns?"

And Friend Christine instantly sets out twenty-eight bowls of Whiskas, neatly labelled Monday, Tuesday, Wednesday ... and explains to my two cats that we'll be away for a fortnight.

So, in a summer season, we find ourselves intent – all found on in a tent on The Links – to dig the Old Royal Burgh of Cromarty. We arrive to find the fair field full of folk. Old friends, new faces, and several archaeological gypsies on their digging-season migration. If our reputation has preceded us nobody is so uncouth as to mention it; and site director, Steve Birch, seems pleased to see us. And why not? All volunteers are welcome – regardless of advanced age, infirmity and archaeological inexperience. We qualify on all counts.

We have shrewdly avoided the initial heavy lifting. Already the trenches are open. An absurd mountain of spoil testifies to the soil-shifting toil of week one. We are here for weeks two and three. We arrive just in time for a quick site tour before tea break. In the doorway of the tea tent is a table loaded with chocolate brownies; and on the grass beneath is a glister of shiny schist. Yes! Cromarty has it all! Cakes and querns.

Burgess plot frontages on the 'King's Causey' are inaccessible. The dig concentrates on the backlands. But even at the foot of the burgh roods there are strands of wall, clay floors, ankle-snapping cobbled wynds, pits and ditches. Shelly (fishing-bait) soils yield bucketfuls of medieval food-waste, surviving as assemblages of bones and teeth. We attend a lunchtime training session and eat moist yellow home-baked cake while learning to distinguish cow bones from horse.

Rich brown soils yield sherds of green-glaze med pot. We attend another training session (fruit cake this time) and learn that there is no such thing as green glaze: the term is unhelpful – green glazes have been used ever since Roman times. We return to the trenches and a further harvest of medieval pottery with green glaze.  The merchants and craftsmen of medieval Cromarty shared a taste for sturdy cooking pots and tableware: assertively solid ceramics reflecting the burly self-confidence of a royal burgh.  Home-brewed ale and imported wine was poured from chunky green-glazed jugs: couthily decorated and cheaply replaceable. Thick ribbed sherds and hefty handles (all glazed green) season the rubbish-fill of every midden, ditch and kennel. There are some finer wares and subtler designs too. A thin (green glazed) potsherd with a moulded shell design represents a more sensitive aesthetic – appropriate to the symbol of St James the Great (and the pilgrimage cult of Santiago de Compostella). The cockle-shell hero who excavates this front-cover find trumps his own triumph moments later with a complete sickle (or hook) from the same deposit. My prosaic green-glaze finds and pot lids (recte stone disks) can't compete with this. But the cake fairies provide fruity flapjacks to dispel despondency.

I transfer to the Thief's Row trench, where a new road that slices through the Anglo-Norman town. Broad mud-mortared foundations supported stately merchant dwellings on the street front – aligned against the grain of the original plan. We guess at the domestic arrangements: a first-floor hall-and-chamber; lofts under the thatch and ground-floor warehouses. With foreshops and forestairs, and jettied upper storeys – these dwellings of 'three house height' with 'glassen windows' were in the mainstream of late-medieval burgh style. The backlands of the Thief's Row feus probably extended to the seashore – presumably to a waterfront. Here Cromarty merchants enjoyed the usual burghal privileges, confirmed by James VI in the 1590s: monopolies on trade in wine, wax, wool, cloth, salt, tar and iron; freedom to lade staple goods arriving by ship in the 'heavin raid and herbour ... in all places within the craiges callit Souteres'.

Friend knows all about the niceities of medieval town planning and burghal liberties. But Friend also inhabits a parallel world of querns. Oblivious to conflicts of loyalty and professional politics, she initiates her own personal project: recording querns on Steve Birch's archaeological site for Fraser Hunter's database at the National Museum. She starts work, of course, with the querns in the caking tent. She draws the exposed surface of a burly bottom-quern that props the quoin of a dwelling-house. She sketches a small pink-stone quern segment in situ in a clay-bonded wall; and records an elegant grey schist upper quern (four handle holes and four rind slots) that lies on a cobbled pavement. She monitors the dogged mattocking of professional archaeologist, Dave Anderson, our Moray pal. And as Dave barrows out the rubble of tumbled walls and cobble floors he delivers successive pizza-slices of yellow sandstone that fit together as a typical three-handled Highland quern.

Having fulfilled her querning quota for Fraser, Friend returns to trowelling for Steve. She shifts a barrowload of dirt to uncover the black stripe of a burned-down fence. In the heart of the feature is a red sandstone, fire-cracked, subtly convex, peck-dressed bottom-quern.

And Friend graciously accepts a general homage as Christine, Queen of Querns. 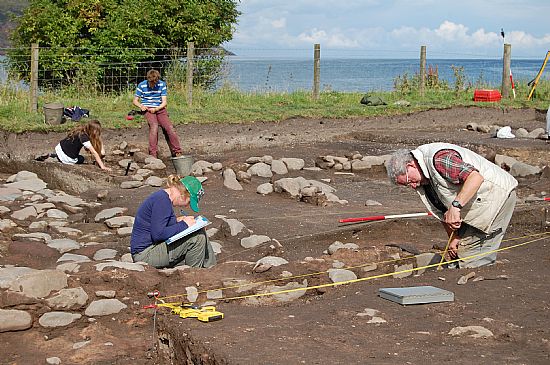 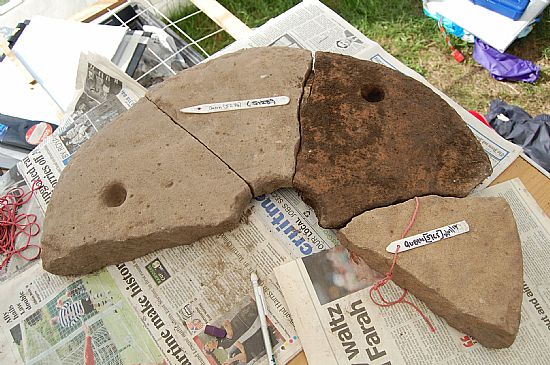