The team are enjoying the enthusiastic volunteers and continuous visitors to the site - and the fantastic weather adds to the enjoyment (despite some strong winds today).

The detailed recording of the main trench is now complete, having revealed a complex of walling on the south side of Thief's Lane, much of which appears to predate the last phase of the road and at least one of which appears to form part of a Medieval building.

We have also managed to trace the continuation of the wall first exposed in the shoreline erosions (with the help of SCAPE), which survives at about 75cm below the turf.  In area 2, the shell midden layer has a curious circular pit cut showing at the centre and a substantial section of walling or other structure has been revealed.

Still plenty of finds coming out, including Medieval pottery as well as intriguing personal objects such as coins, buttons, clay pipe fragments and other items.

Now that the initial phase of this project is complete, we are investigating individual features and structures on the site...so watch this space! 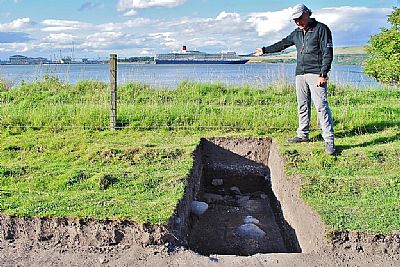 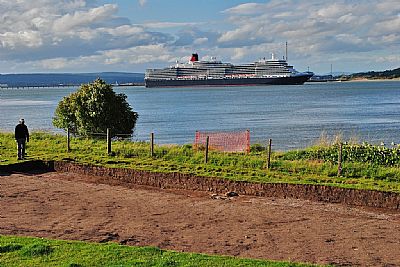 wall from the shoreline erosions!

Comment from alistair mcpherson at 22:53 on 03 August 2013.
fantastic
Comment from Sandy Thomson at 14:49 on 06 August 2013.
Odd that the walls of the buildings (if that's what they are) are not at right angles to the line of the roadway.