Wot no biscuits? - Trenches, mud and shells on the Cromarty front

My aged grandfather advised me once: "Never volunteer!" Sound advice. He volunteered once, and found himself in a world of mud and shells and trenches.

It is not always easy to follow Grandpa's advice: the line between conscript and volunteer is somewhat blurred. And despite my best endeavours I found myself following family tradition: a volunteer in a world of mud and shells and trenches.

It happened because, somehow, word got around that I had an interest in medieval burgh planning - and some digging experience too. And once the archaeology people found out where I live, I had no place to hide. A steady bombardment of emails, texts and phone calls ensued - wheedling, encouraging, flattering, brow-beating. My final capitulation was never in doubt. I held out for a week. Then biscuits were mentioned; so I surrendered and came to dig at Cromarty.

Previous experience (digging in Moray) had taught me that some archaeological operations are more strenuous than others. Ordinary trowelling is a gentle, almost Zen-like, activity. Mattock-and-barrow work is cruel hard labour. I was emphatic. I am too old and feeble for heavy lifting.  And it was with that caveat I presented myself on site for the second week of the dig. And now reality kicks in. First I am informed that the funding does not stretch to biscuits. Then I am handed a mattock and ordered to dig a six-metre sondage.

Half a ton of soil later - and with another foot of dirt added to the mountainous spoil-heap - the relief from mattocking comes at last. Would I like a change of job? Would I like a change of job! I look forward to something more moderate: some undemanding find-washing perhaps, and a chance for convivial banter with the SCAPE girls in the shelter of the big marquee. I protest that, whatever I do, it must not over-tax my weak and biscuit-starved brain. This condition is accepted with the same sympathetic consideration as my mattocking caveat. I am handed a planning frame and a 6H pencil and told to draw my trench - and someone else's too: bewildering complications of stone, clay and context that might be the houses of the first medieval burgh of Cromarty.

I had made it clear at the start that, as a volunteer labourer, my main purposes were to make up numbers, top up my tan and flirt with mucky ladies in the trenches. I am here to evade responsibilities (cats, grass-cutting, publishers' deadlines) at home. I do not want to break a sweat, or be mentally challenged and burdened with responsibility in Cromarty. But now I almost wish I was back at the mattocking as site director Steve Birch inveigles me into the heavy brainwork of interpreting the building foundations he has uncovered: a cobbled floor (or vennel); a sturdy double wall that would not be out of place in a nineteenth-century cottage; more meagre stonework alongside that resembles the founds of turf-walled dwellings that I have research in Moray. Between the walls, is a careful space, suggesting the nine-inch statutory gap characteristic of medieval burgh planning. But what do I know? I'm just a volunteer.

And then there are the finds: wonderful things that establish tentative contact with Cromarty folk down the centuries. There are oyster shells among thick layers of midden material. This kitchen waste - the leftovers from poor folks' dinners - suggests an aphrodisiacal explanation for the rumbustious vigour of the medieval world. Dense deposits of mussel, cockle and whelk evidence the tedious women's work of baiting hooks for the industrial line-fishing that flourished in the Moray Firth during the eighteenth and nineteenth centuries - before the mechanised fleets of drifters and trawlers stripped the seas to the edge of species collapse.

Lower contexts yield med pot. Bright orange and green-glazed sherds date our site to the first hey-day of Cromarty, as a link in the chain of royal burghs that concentrated commerce and imposed Anglo-Norman civilisation in a Celtic countryside. And so many jug handles! But perhaps that might be expected in a community that enjoyed the burghal monopoly of trade in wine.

The prize find is a spindle whorl. The artefact is charming and personal, inviting extravagant interpretation. A romantic volunteer insists that the prettily-decorated stone weight might have been the betrothal gift from a love-struck loon: though the implied promise of a lifetime of domestic industry hardly seems the best basis for enduring happy marriage.

Two weeks' work scarcely scratches the surface. The excavation however, opens new perspective on Cromarty's curiously episodic burghal history. And two weeks' hard labour proves the importance of the site - and should be enough to attract funding for a bigger dig next year. Nonetheless digging continues to the very end of the last day. The Cromarty dig concludes in with a last-minute flurry of activity. Even as the afternoon draws on, Steve Birch is busily extending his excavation. Panicky trench supervisors, meanwhile, become tetchy, urging the volunteers - weary to the point of mutiny or desertion - to finish digging and record their excavations. My final task is to draw a ten-metre section of the trench I have been working. It is five o'clock. Finishing time. I straighten my back for the first time in a week. I have begun to pack up my things - steeling myself for the long drive home - when the supervisor asks, "Could you just draw the other fourteen metres of the section before you go?"  Surely this is an opportunity I can't refuse.  On the other hand, where are the promised biscuits? 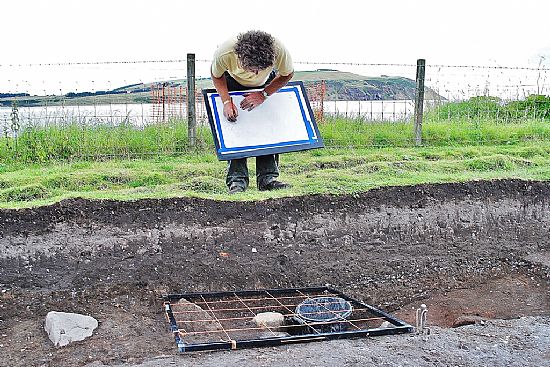 John: hard at work in Cromarty

Comment from alistair mcpherson at 10:20 on 27 August 2013.
you will be nice and fit for clarkly ,will tell fraser to cancel the jcb ,as you run on bicuits which is cheaper than diesel
Comment from Pat Haynes at 16:45 on 27 August 2013.
Oh John, where were you when the muffins, scones, and brownies were passed round? The SCAPE girls promise you wont go hungry next year if home baking is all we need to tempt you back!!